On December 25, 2001, we welcomed our angel Gabriel into this world. Christmas for us has never been the same….a true blessing! The last 10 years have been difficult, an emotional roller coaster to say the least, but we are still blessed. Starting from the age of just six months old, Gabriel had a host of medical issues including cradle crap and severe allergies on this earlobes, nose and lips. This made life for him very difficult as a baby.In January 2005, at the age 3, Gabriel began to have a severe case of bloody diarrhea that did not resolve with antibiotic treatment. At our very first appointment the doctor reviewed the labs immediately sent us straight to the emergency room. I remember that sinking feeling and I just cried while the doctor told us she wasn’t sure what was wrong. I remember Gabriel, who had just started putting sentences together, saying, “Mommy, please don’t cry” over and over. For about 3 weeks no one could tell us what was wrong with our baby. Why was he so sick? Eventually, he was diagnosed with Crohn’s and put on what we were told would be his lifetime medication. In September of the same year, while still suffering from bloody diarrhea, Gabriel developed an abscess on his neck that needed to be drained. While the abscesses were somewhat controlled with antibiotics, they would continue for years. In addition to the abscesses, Gabriel had always presented with skin problems such as severe crusting around his nasal passages that would blister and bleed, blisters on his lips, mouth sores. Needless to say this caused Gabriel to feel bad about going to school for fear of being made fun of. We did everything to keep him healthy….we just didn’t know there was anything different that we could have done to make it better.We’ll call it motherly instinct, but I still was not convinced that Gabriel had Crohn’s and in 2008, without telling the doctor, I took Gabriel off his “lifetime” antibiotics. In August 2011 Gabriel’s gastroenterologist was very surprised that he had not relapsed and did more testing that finally ruled out Crohn’s disease.Unfortunately, our happiness did not last too long. On September 29th we had to bring Gabriel into the emergency room due to fevers above 100 degrees lasting for 2 weeks. At the emergency room a CT Scan revealed that the reason for the fevers were due to 3 abscesses in the liver; and we were once again admitted.After years of sickness, some determined doctors came to find that Gabriel was born with Chronic Granulomatous Disease (CGD). That would offer us the relief of knowing what was wrong with Gabriel, but we still needed to remove the abscesses from Gabriel’s liver. We tried every option, surgery, drains, nothing worked. The last resort would be a liver transplant. This was very scary news…too much to bear really. Just when Gabriel was ready to go down to have a liver resection, the immunologist received information on a recent study that showed 8 out of the 9 patients with liver abscesses successfully treated using corticosteroids. The study was only in the stages of being reviewed for approval and not even yet published. We agreed to treat Gabriel with the steroids. This helped Gabriel, but was not a cure. Gabriel’s immunologist and surgeon recommended that we consider a cure for the disease by way of a Bone Marrow Transplant. Fortunately, coming from the Bronx, we did not have to relocate in order to receive treatment like so many other families. We met with Dr. Cairo in January 2012 who provided with us with many options for a cure for Gabriel and put us at ease with his extensive work on CGD and Transplants. Gabriel received 7 days of reduced intensity chemotherapy and the transplant was completed on April 25th, 2012 using cord blood from an unrelated Hispanic female with 5/6 match.Gabriel was discharged 57 days after his transplant and has been doing extremely well despite complications with his lungs for the greater part of 2013 due to a very serious infection of.Thankfully as of June 2013, Gabriel was lifted off of all medications and IVs that were administered at home. Despite some of the complications, we received the great news that he is cured and no longer needs to be isolated to minimize risk of infections.

Today, Gabriel is slowly starting to resume a more normal life for an 11 year old boy. A life-time of medications would have caused a host of complications for him, but he is large as life and a true warrior! 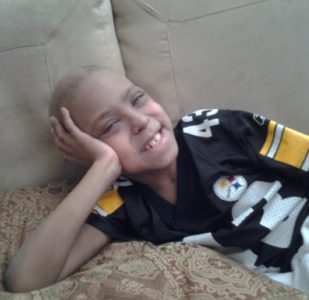