Despite both of Hanif’s parents, Khuraira and Patrice, being carriers of the Sickle Cell trait, they were confident that he would not be born with Sickle Cell Disease. Already having had 2 children without the disease, Hanif’s parents felt that he would be no exception. Hanif’s vibrancy as a newborn made Khuraira all the more certain.  However, results from testing after his birth proved otherwise. Having lost friends and family from Sickle Cell Disease, Khuraira and Patrice were devastated by the news. However, they pledged to be optimistic for their son’s future.  Having come to the United States from Nigeria, they knew the quality of care would be better for their son than their friends and family had experienced. Despite this, Hanif and his parents would be severely tested by the disease.

Hanif’s worst crisis came just after his eighth birthday and landed him in the hospital on a ventilator for acute chest syndrome. The attack grew so severe that he had to be transferred by ambulance to the Intensive Care Unit of Maria Fareri Children’s Hospital. Hanif’s condition continued to worsen and doctors had no choice but to place him in an induced coma after both of his lungs collapsed. He was induced for six weeks and doctors were uncertain if he would make it. His parents were in tremendous turmoil with limited options that could help their son.  It was during this time that a physician from the Division of Pediatric Hematology Oncology and Bone Marrow Transplant came to visit Khuraira and Patrice to let them know that a bone marrow transplant from a mother or father would be an option for Hanif if he survived this crisis.  Luckily, Hanif pulled through but his functioning was impaired.

Upon his recovery, Khuraira and Patrice considered bone marrow transplantation as the only way to save Hanif from another life threatening crisis. Unfortunately, he had no tissue matching sibling donors. After meeting with Dr. Cairo and other physicians in the division, his parents were worried about associated risks, but decided that given Hanif’s pattern of crisis, a transplant would give him a better chance for life. Hanif underwent a familial haploidentical stem cell transplant from his mother as the donor on the research protocol.  Today, Khuraira and Patrice are confident they made the right decision for their son. Currently, Hanif is one year out from his transplant and is sickle cell disease free and without pain, and has resumed a normal life. He wants to a write a book to share his experience with other kids and cannot wait to be old enough to become Dr. Cairo’s assistant! His ultimate goal is to be a doctor so he can help find a cure for Sickle Cell Disease so that no child has to go through the pain he endured. 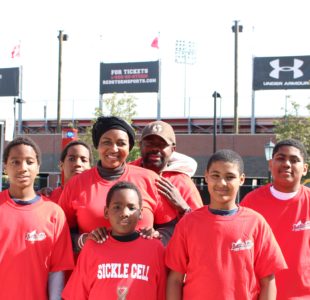