“God gives the toughest battles to his strongest soldiers.” Meet one of them: Peter Pinori.

In December 2012, 24 year old Peter, woke up to find a small lump in his neck. His primary doctor sent him to an ENT, where they ordered a needle biopsy of the lump. But by this time, the lump seemed irrelevant because he had developed another lump; this one was the size of a golf ball.

On December 14, 2012, Peter was diagnosed with Stage 4 Hodgkin’s Lymphoma which means it had metastasized to his neck, spine and abdomen. After his diagnosis, he was transferred to Maria Fareri Children’s Hospital on a recommendation from his sister Daniela. Daniela works as a Pediatric Oncology Nurse and recommended that he be seen by Dr. Mitchell Cairo. After he had a phone conversation with Dr. Cairo, Peter told his family: “I had a good feeling about the whole thing.”

Peter recalls: “I took the news better than my family. Cancer takes a big hit on your life. When I found I had cancer I was like ‘really?’…and finding out I had Stage 4 Cancer was a devastating blow.” But that didn’t change his spirit, “you have to remain positive. Stay funny, keep people close to you happy. My family was strong and kept me going.”

Following his second round of chemotherapy, the doctors ordered a PET scan, as they routinely do, in order to see if the chemotherapy is effective in treating the cancer cells. When they returned to tell him the results, they told him there was no trace of disease. In other words, the therapy had worked and he was in a complete remission and cancer free!

After six months of chemotherapy, Peter feels he is lucky to be here. “Six months of chemotherapy to some of these kids is nothing. They have been through so much more, I’m the lucky one.” He also credits the Doctors, Nurses and Staff at Maria Fareri Children’s Hospital to his healthy return. “This place is amazing. The care and hospitality here are the best in the world. The doctors and nurses are like family to me.” Peter would like to help other kids in the future that are going through the same experience. “I’d like to talk to kids to help them what they are going through.”

The whole experience gave Peter a new perspective on life. “Going through cancer, you have no excuse to complain about anything. Life can’t be that bad anymore. I want to keep living and want to enjoy my life.” Peter is inspired to try out for the American Ninja Warriors – where hundreds of competitors challenge themselves against an obstacle course to qualify for a shot at making it to Japan to compete in Sasuke 23. The prize to win is a half million dollars which he plans to donate if he wins.

“Having cancer is like going through an obstacle course. If this didn’t beat me, nothing can.” 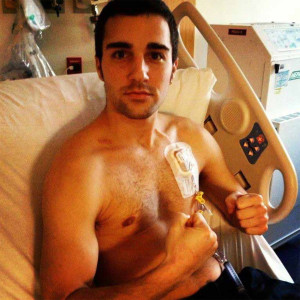