Meet Ryan Gilchrist or better known by his friends “Gilly”. Going into 8th grade, he was an avid sports player; hockey, lacrosse, basketball, you name it. In January of this year, he started experiencing stomach pains. They kept getting worse over time, to the point that during midterms at school, he had to check himself out and into a hospital to find out what was wrong.

On January 23, Doctors at Maria Fareri Children’s Hospital discovered that he had Non-Hodgkin’s B-Cell Lymphoma. “I was shocked and a little scared. I didn’t know what to expect. But the support from my friends and family was incredible.” Ryan’s cousins initiated “Team Gilly” to show support during his battle with Non-Hodgkin’s Lymphoma. Ryan’s friends, classmates and teammates were all active participants in his fight against Cancer under one united “Team Gilly”.

As the Gilchrist family did their due diligence on where to go and how to treat their son, they reached out to their community including friends, family, and co-workers for advice. In an almost unanimous decision, all arrows pointed to a world-renowned oncologist and expert on B-cell lymphoma at Maria Fareri Children’s Hospital, Dr. Mitchell Cairo. When all was said and done, Ryan started chemotherapy and was completely cancer free in 90 days. “We had a party when the last bag of chemo was finished. It was a great feeling to be done.”
Ryan says he is humbled by his experience and hopes to help out other kids that are going through the similar struggle he went through. We have come a long way to treat lymphoma and Ryan can attest to benefitting from a more effective, less toxic therapy and shorter treatment period. This allowed him to return back to a normal life and to the sports that he loves. Ryan is just one of many amazing examples of the research being done by PCRF and the lives that your support and contribution are saving. 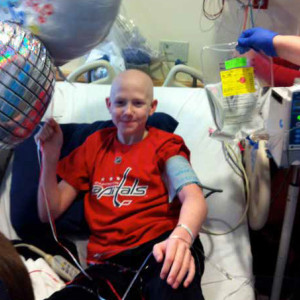